This summary is taken from content provided by the British Association for Shooting and Conservation.
The most important rule of gun handling……

NEVER POINT ANY RIFLE, LOADED OR UNLOADED, IN AN UNSAFE DIRECTION.

It is estimated that there are six million air rifles in the England And Wales, the vast majority of which are used in a safe and responsible manner. This code offers guidance to those who shoot with them. It does not apply in Northern Ireland where firearms laws are very different.

Above all, safety is the most important consideration. Always know where the muzzle of your air rifle is pointing and NEVER point it in an unsafe direction. Whenever you shoot, make sure you know where the pellet is going to end up before you pull the trigger.

The law makes no distinction between air rifles and more powerful guns for which you need a licence – they are all classed as firearms. This means that any offence you commit can carry a very heavy penalty – and there are at least 38 different offences. Following this code will help you to keep on the right side of the law, but, if you have any doubt, seek advice from BASC or your local police firearms licensing department.

As of the 1st of January 2017, those in Scotland wishing to purchase an air weapon above 1 joule require an Air Weapons Certificate (AWC) to purchase and own. For more information, please go to the Scottish Air Weapons Licensing webpage here.

If you are 18 years or older there are no restrictions on buying an air rifle and ammunition, and you can use it where you have permission to shoot.

You can:
- borrow an air rifle and ammunition
- use an air rifle, without supervision, on private premises where you have permission

You cannot:
- buy or hire an air rifle, or ammunition, or receive one as a gift. Your air rifle and ammunition must be bought and looked after by someone over 18 – normally your parent, guardian or some other responsible adult.
- have an air rifle in a public place unless you are supervised by somebody aged 21 or over, and you have a reasonable excuse to do so (for example, while on the way to a shooting ground).

You can
- use an air rifle under supervision on private premises with permission from the occupier - normally the owner or tenant. The person who supervises you must be at least 21 years old.

You cannot
- buy, hire or receive an air rifle or its ammunition as a gift, or shoot, without adult supervision.
Parents or guardians who buy an air rifle for use by someone under 14 must exercise control over it at all times, even in the home or garden.

It is illegal to sell an air rifle or ammunition to a person under 18 years of age.

Where you can shoot

Where you intend to, always ensure that you are authorised by the landowner or person with the sporting rights and that you know precisely where the boundaries are. Get permission in writing, if possible, to remove any doubt.

Whenever you are in a public place you should carry the rifle in a gun cover and always ensure that it is unloaded and not cocked.

Only shoot where you have the permission of the landowner or tenant.

Firing pellets beyond your boundary

It is an offence to fire an air rifle pellet beyond the land where you have permission to shoot, unless the occupier of the neighbouring land has also given you permission. Where someone under 14 is shooting, both the young person and the supervising adult can be prosecuted.

It is also against the law, in England and Wales, to fire an air rifle within 50 feet of the centre of a highway if this results in someone being injured, interrupted or endangered. These offences could be committed, for example, when someone is shooting in their garden close to a road and the pellets ricochet onto the highway.

It is an offence in Scotland to discharge any gun in a culpable or reckless manner. This means shooting without caring about the safety of others.

What you can shoot 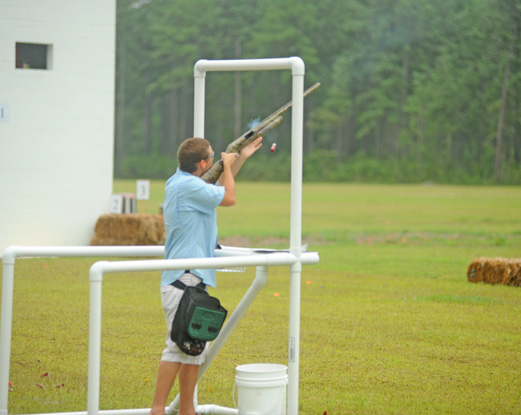 There are numerous clubs catering for this growing sport, throughout the UK, and they can offer great help and shooting opportunities to both the novice and the experienced shooter alike. You will find contact details on www.goshooting.org.uk

If you want to practise on your own premises make sure that you have an effective backstop. Soft earth or chipboard is ideal, but don’t use any hard, polished surface because it is likely to cause a dangerous ricochet or could cause the pellet to rebound and hit the shooter.

Remember that you can be prosecuted if any pellet goes beyond your land, whether it is directly fired or an accidental ricochet.

Many people shoot live quarry, either on their own land or where they have permission. The species which you can shoot are limited by the law and by the effective power of an air rifle.

All birds are protected, and although there are seasons when you can legally shoot game, and some wildfowl, they are not suitable quarry for air rifles. However, as long as you are complying with firearms law, you can shoot certain pest bird species. These are covered by open general licences which, in simple terms, mean you can shoot the birds listed, provided you have the landowner’s permission and provided you are doing it for one of the reasons allowed by the licence.

You can shoot mammal pests at any time provided you have the landowner’s permission. Air rifles are suitable for: brown rats, grey squirrels, stoats, mink and rabbits.

Respect for the quarry

Always shoot well within your capabilities. Practise on targets, never on live quarry, to establish the maximum range at which you and your rifle can consistently hit the point of aim that will ensure a clean kill; this is usually the head, and normally has a maximum diameter of about three centimetres (an inch and a quarter). Practise regularly to improve your shooting and stalking skills.

Make sure you know where the kill zone is for each species that you are going to hunt. For mammals the side-on head shot is the preferred target. For birds, head shots are effective but difficult because the target area is very small and rarely holds still. Shots to the breast or body cavity give a bigger target area but remember that dense feathers or a crop full of grain will limit the pellet’s effectiveness. The area under the wing is a good place to aim for.

You must zero your rifle and sights (check their correct alignment) before starting any hunt; usually a riflescope will come with instructions on how to do this, otherwise there are many books which explain the principles.

It is your responsibility to be able to recognise your quarry and know when and where you may shoot it. Never shoot unless you have positively identified your quarry.

Always despatch wounded quarry quickly to minimise suffering, either with a second shot or a sharp blow to the base of the skull. Be particularly careful when dispatching wounded rodents – they can bite and scratch with a risk of serious infection. DO NOT TOUCH RATS. They may carry fatal diseases, so you should lift them with a fork or shovel.

Always ensure that your air rifle is powerful enough to achieve a clean kill of your chosen quarry and do not attempt a shot of more than 30 metres. Generally the ideal power level is just over 11 ft lb (15J). For an air rifle that is more powerful than 12 ft lb, (16.25J) you must have a firearm certificate.

Never shoot at partially obscured quarry or shoot at quarry which could escape into cover before it can be retrieved. For example, do not shoot rabbits which are less than two metres from their burrow.

Certain types of air rifle are more suitable for hunting than others. Avoid those air rifles which take excessive time to charge, load and fire. Repeating air rifles give an immediate second shot which is always an advantage. All air rifles must be well maintained in accordance with the manufacturer's recommendations. If in doubt - consult your local dealer.

Choose pellets which are designed for hunting. These will produce a cleaner kill than those which are intended for target shooting. Check every pellet before loading to ensure that it is not damaged or deformed. 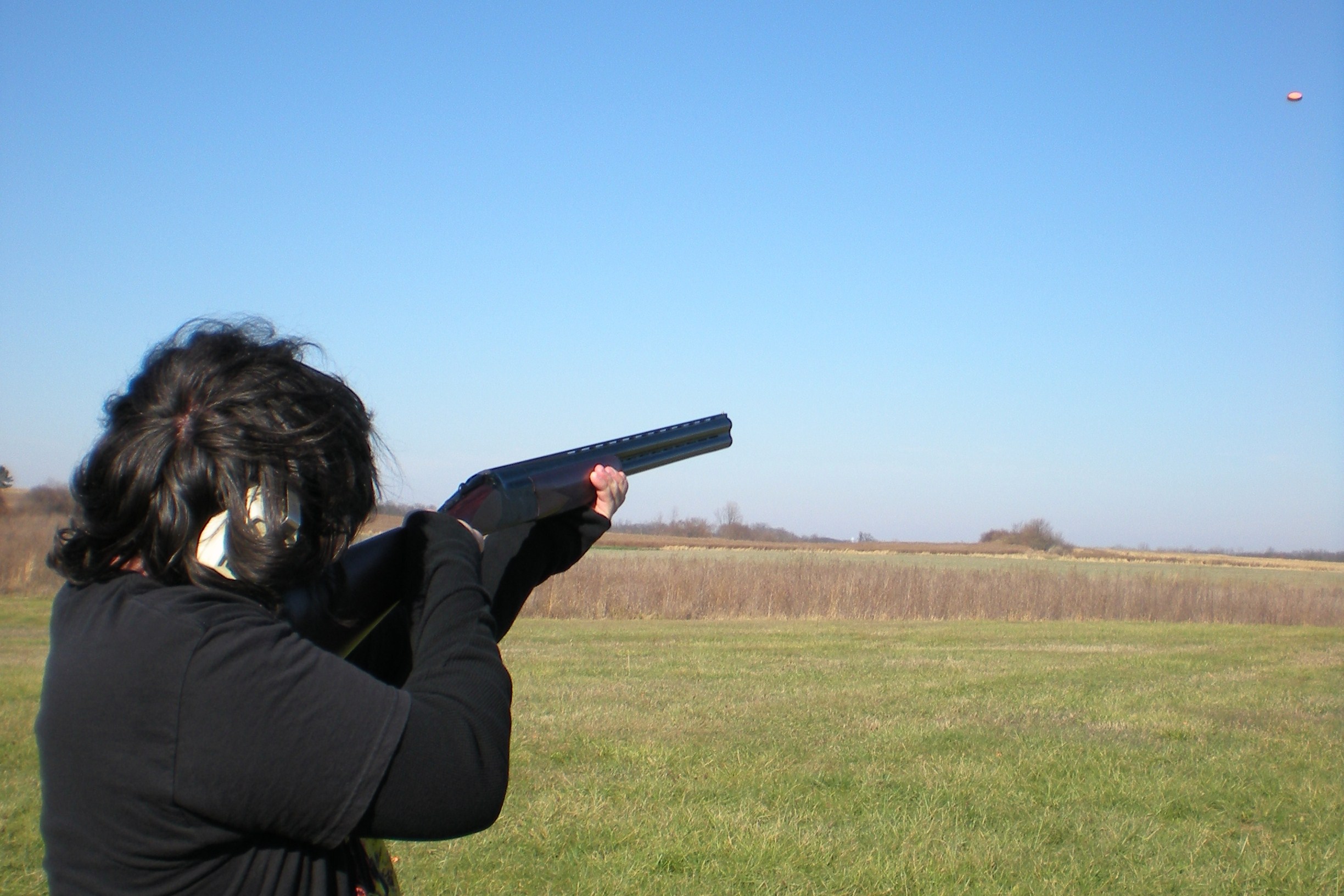 • Always check with the landowner, in good time, if you want to go shooting.
• Always confirm with the landowner what quarry you may shoot.
• Always respect the owner's property, crops, livestock and fences and follow the Countryside Code (https://www.gov.uk/government/publications/the-countryside-code).
• Always treat an air rifle as though it is loaded and keep its muzzle pointing in a safe direction.
• On picking up or being handed an air rifle, check immediately to ensure it is not loaded e.g. that it is uncocked and that there is no pellet in the breech. Be particularly careful when checking pre-charged pneumatic air rifles.
• Before you fire your rifle, consider where the pellet could go. Be sure that no damage can result if you miss your intended target.
• Always bear in mind the possibility of a ricochet.
• Never put down a loaded air rifle or leave it unattended.
• Use of a silencer can minimise disturbance to wildlife, livestock and other countryside users.
Remember that all shooters will be judged by your actions and ensure that your conduct is always above reproach. Encourage the same attitude in your shooting companions. Above all, be safe and be sensible.

At the end of the day

Always leave your shoot in the condition in which you would like to find it. Make sure that you collect all your equipment.
It is courteous to thank the landowner and to offer him something from the bag if you have shot any edible quarry. Take care of your edible quarry – remember it is food, store it in a cool place and never waste it.

Non-edible quarry should be disposed of discreetly, carefully and should not create a health hazard. This is a legal requirement. Under most circumstances deep burial beyond the reach of a carnivorous animal would be appropriate.

The displaying of carcasses on fences or on a gamekeeper’s “gibbet” serves no useful purpose and may offend other countryside users.

Take care of your gun; it is a precision weapon and damage or mistreatment can seriously affect its performance and safety.

Do not attempt to strip an air rifle without having the proper tools, facilities and knowledge to do so safely. Many air rifles contain powerful springs which can cause serious injury if released in an uncontrolled manner.

After shooting, ensure your air rifle is dry and free from dirt before storing it. Metalwork may benefit from a wipe down with a lightly oiled rag or a silicone cloth. The barrel should be cleaned using a proper barrel cleaning kit, and again lightly oiled. Only use the correct lubricants in accordance with the rifle manufacturer’s instructions. Always carefully wipe the oil from the bore before shooting.

That all who shoot in Britain conduct themselves according to the law and to the highest standards of safety, sportsmanship and courtesy, with full respect for their quarry and a practical interest in wildlife conservation and the countryside.

Never guess at what the law allows. If in doubt, contact BASC or your local police firearms licensing department.

To view and print PDF files, you must have Adobe® Acrobat® Reader installed: click here to download the software

Revised July 2008 in association with ACPO. BASC gratefully acknowledges the endorsement of this code by the Association of Chief Police Officers.